6 years. 6 years I, we, have been working alongside teachers and union leaders to try to make a difference for NYS children caught in the middle of politics, greed, and power struggles. Every year, I personally spend the two months leading up to the tests reading through hundreds of horror stories sent to me by desperate parents trying to do what should be a simple action: opt out of state assessments. For some of us, opting out is as simple as receiving notification by our school districts that we have this right, filling out a simple form, turning it in, and protecting our children from multiple hours and weeks of meaningless testing. For many parents, this process begins with schools telling them they in fact do not have this right. They are told if they opt out they will be held back, will fail, won’t get into middle school, high school, or even college. They are threatened with CPS and calls to immigration. During testing their opt out children are harassed, reprimanded and bullied by administrators trying to set an example. They are excluded from pizza parties, candy gifts, and school carnivals. The adults in these situations completely lose their moral compass, and the children become the targets. It is sad and unconscionable. And more importantly, completely preventable.

They are told if they opt out they will be held back, will fail, won’t get into middle school, high school, or even college. They are threatened with CPS and calls to immigration. During testing their opt out children are harassed, reprimanded and bullied by administrators trying to set an example.

This year we had a breakthrough that could have ended these grueling months of horror stories and interventions. We had a Senator willing to step up, and we had a bill. This was the bill we had dreamed about. One that would make it illegal to treat kids in this manner. This bill didn’t address the larger challenge of over-testing, the chronic problems with the curriculum, or the eroding data privacy. But IT WOULD HAVE PROTECTED CHILDREN. So simple, yet so profound.

Months ago began the hard work of drafting the bill, finding just the right sponsors, and getting the word out that this was the bill that hundreds of thousands of parents wanted our elected officials to pass. Senator Jackson and his team worked tirelessly to get this right. NYSAPE put out an action alert calling on parents and teachers to send letters to legislators telling them to support the bill and sign on. As momentum was growing, the political games began.

Let me be clear. I’m rank and file all the way. I’m the daughter of a NYSUT unionist and the sister of two more. I have made lifelong friends with local union leaders and members across the state. NYSUT members make up half of my organization and sit on my steering committees. It is because of these teachers that the absolute duplicity of their union makes me speak so loudly against it right now. They deserve a union that represents them and their children. They deserve one that will operate with democratic transparency. We all deserve that.

It’s no secret that I am not a Michael Mulgrew fan. I have witnessed the complete and utter lack of democracy that is the current teacher’s union. The union is run by voting. The majority wins. But what looks democratic on the surface hides the ugly truth. The UFT (city caucus run by Mulgrew) has the votes to control the union. The RA (where voting takes place) is held in places that many members of smaller locals can not afford to get to or are willing to travel to. The UFT delegates ALWAYS show up. There are caucuses within the UFT, such as MORE, desperately trying to make a difference and change the leadership, but even that is a battle that may never be won. I attended an RA once, to witness first hand the block voting, noise signals, and complete domination by the UFT/Mulgrew. It was heartbreaking. My only face to face meeting with Mulgrew ended with him refusing to back down on keeping testing as the major piece of the evaluation system because he believed, taking it out of the hands of administrators, even if it placed it on the backs of kids, was preferable. I had heard very early on with this student protection bill that Mulgrew, who very publicly, and very often, has spoken out against opting out, would not allow this bill to pass. Our hope was that Andy Pallotta would in fact come to realize that not supporting a student protection opt out bill would be a PR nightmare and he would instead lead with his moral compass rather than what he was told to do, regardless of the consequences from UFT. We had been conversing with NYSUT’s VP, who assured us on several occasions that NYSUT was is full support of the bill and NYSUT’s “lobbyists have been lobbying in support of this bill”.For what it is worth, I absolutely believe she PERSONALLY was behind us and this bill. But as we know, that makes no difference in the larger picture of roles within the organization. This “support” was contrary to what we were hearing from legislators. In fact, they weren’t hearing ANYTHING from NYSUT about the bill, and most believed NYSUT was NOT supporting the bill. We kept asking, and asking for this support in writing FOR MONTHS. Not once were we told that support was contingent on an amendment. Funny thing is, the bill sponsors, who would be the ones to make changes and amendments, weren’t told that either. This wasn’t the first time either. A few years ago we worked with Todd Kaminsky on reversing some of the most damaging aspects of the Education Transformation Act. Those bills were also killed, mostly in part because NYSUT made it clear to legislators that they would not support. Mulgrew’s insistence on keeping testing in the evaluation matrix was again the reasoning. 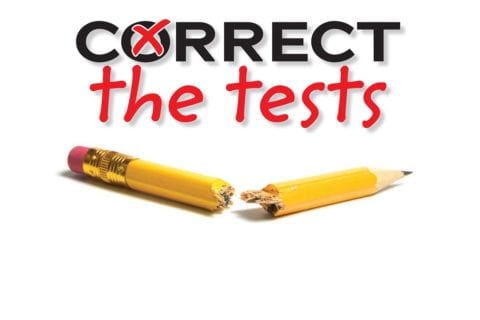 The night before the last day of session this week we had a miracle. The Senate passed the bill, and we heard word that the Governor would sign if it passed the Assembly. The kids in NY were about to have their win! Here’s the way it works at the end of session – if bills make it to the last day and are ready for a floor vote, they can pass. If a person or organization wants to kill a bill, but they don’t want to take the fall for killing it, they propose amendments on the last day. It happens ALL THE TIME. And that’s exactly what happened here. NYSUT realized this thing could pass. This is the only part I will guess at – Mulgrew must have made some calls to the Assembly and NYSUT, throwing his weight around. What we know for a fact: Suddenly Benedetto, who had to be the one to bring it to a floor vote, indicated he would ONLY do so if NYSUT put their verbal support in writing. This is cowardly and a huge red flag of just how little the voices of constituents matter. Benedetto should lose his Assembly seat for that. NYSUT now had a problem. They had been called out as the last remaining factor for months and years of work that culminated in this bill getting passed. I’ll admit, the amendment was a genius idea. The language of the amendment protected schools against a threat that the Regents already eliminated when they removed the Title I funding ties to participation in our NYS ESSA plan. It wasn’t an amendment that made sense, as there is currently no law or regulation at the state or federal level that puts Title I money in jeopardy, nor does NYS have ANY jurisdiction over federal Title I money, but man that sounds plausible!! And it makes them look like they’re the only ones who thought enough about children in poverty!! Win win! Best yet, it can’t be done because it’s too late AND it’s not based in any current law or regulation issue!! And added plus is that everyday parents and teachers don’t know enough about ESSA and Title I to challenge them. I have already seen local members believe the justification of killing this exceptional and desperately needed law, defending the action.

NYSUT has made a big showy campaign of “Correct the Tests!”, and collecting testing horror stories. Yet, when the opportunity arose that would eliminate the source of many of those stories and protect children in EVERY corner of NYS, they instead chose to sabotage our kids. This is unforgivable. I will personally be sending Andy Pallotta, Jolene DiBrango, and Michael Mulgrew each and every heartbreaking story that comes to my inbox, so they can see first hand what they have supported and encouraged by killing this bill. I encourage all of you to do the same. The stories are listed on the Long Island Opt Out and NYSAPE websites. Pick a few out and send them along. Maybe it will have an impact, maybe it won’t.

Rank and file will still be my friends, my colleagues, and my family. Perhaps we can still make important changes in spite of the obstacles that NYSUT leadership places in our way. Onward.

The NYS Board of Regents has allowed districts to determine how they wish to calculate the high stakes regents exams into the student GPA. As stated in a NYSED memo, NYSED “does NOT require OR RECOMMEND that schools use Regents examination grades as part of the calculation of the student’s final average.”

Governor Cuomo Cuts K-12 Stakeholders out of His Plan to Re-Open NY Schools Board of Regents Ensures Parent and Educator Voices Will be Heard On April 28, Governor Cuomo announced the creation of an advisory board to advise the State’s re-opening strategy for businesses and schools. The New York Forward Re-Opening Advisory Board, created by…

Dear Parents, Educators & Community members, I hope this email finds you and your family doing well during these uncertain times. During Governor Cuomo’s press conference today, he announced working with Bill Gates and the Gates Foundation to guide NYS on ‘reimagining’ our schools. NYSAPE along with Class Size Matters and Parent Coalition for Student…