“Corporate education reform” refers to a specific set of policy proposals currently driving education policy at the state and federal level.  These proposals include:
Increased test-based evaluation of students, teachers, and schools of education
Elimination or weakening of tenure and seniority rights
An end to pay for experience or advanced degrees
Closing schools deemed low performing and their replacement by publicly funded, but privately run charters
Replacing governance by local school boards with various forms of mayoral and state takeover or private management
Vouchers and tax credit subsidies for private school tuition
Increases in class size, sometimes tied to the firing of 5-10% of the teaching staff
Implementation of Common Core standards and something called “college and career readiness” as a standard for high school graduation

What is school choice?

School choice allows public education funds to follow students to a public school, private school, charter school, home school, virtual school or any other learning environment parents choose for their kids. Discussions of choice can be confusing because “choice” involves so many different options.  However, when discussions of school choice do take place, they typically revolve around the following three main choices: public schools, private schools, and charter schools.  Let’s take a look at how each of them is funded.

The reality is that “school choice” particularly in the case of vouchers and charters, redirects the flow of taxpayer dollars from public schools, into unaccountable private hands.  Let’s take a closer look at vouchers, charter schools and how they impact public education

School vouchers are education tax dollars that are diverted from public schools to help subsidize the tuition of private and religious schools.

Charter schools are tuition-free, independent public schools exempt from most of the rules, regulations, and statutes that apply to traditional public schools. Charter schools receive taxpayer money, but are privately run with no local oversight. As a result, charters have greater degree of freedom by districts and states when it comes to staffing, curriculum, instruction, finances etc.

Charters
Charter school laws vary from state to state, but essentially, they are operated under a contract or “charter.”  The charter outlines the details of how the school operates including details regarding how the school will be organized and managed, what the students will be expected to achieve, how student achievement will be measured, how staff will be hired etc.  The charter must then be approved by an “authorizer.”

Authorizer
State laws allow various entities to either reject or authorize charter schools.  These include entities such as higher education institutions, state boards of education, nonprofit organizations, independent charter  boards  and  municipal  governments. State laws also determine the scope of power authorizers have in holding charter schools accountable for meeting the requirements outlined in the school’s charter or contract.  Charter schools must have their charter reviewed by their authorizer after a set number of years, the length of the contract varies from state to state, but is typically reviewed every five years at which point the charter is either renewed or revoked.

New York state has three types of authorizers: LEA, SEA, HEI.  In 2010, state legislation was amended stating that local school districts, NYC Board of Education and Buffalo Board of Education could no longer approve charters, but are still allowed to oversee and renew the charters for schools the city had authorized under the original law.  A charter school may be authorized by the State University of New York (through its Charter Schools Institute) and New York State’s Education Department’s Board of Regents.

Charter School Boards
Charter school board members are appointed by the authorizer. Boards vote on decisions that affect the academics, finances, and organization of the charter school. They discuss and vote on matters such as obtaining a new building, renewing a lease on a current facility, hiring, firing, or retaining their School Leader/Executive Director/CEO, approving the annual budget, or deciding whether to expand the school’s program to serve more students.  However, instead of going at it themselves, many charter school governing boards have hired management organizations to run their schools under contract.  These management companies are either not for profit Charter Management Organizations (CMO’s) or for profit Education Management Organizations (EMO’s).

Management
CMO’s and EMO’s run the day-to-day management of a charter school. The governing board and the management organization  enter into a contract that defines each party’s rights and responsibilities. Management companies responsibilities vary from school to school, but their duties may include educational programming, business operations, and staffing. They also decide if/who it wants to contract as vendors for things such as food services and technology support. Since the charter staff is contracted by the management company and not the board, school, or district means that the charter staff are “private” employees and not covered by the Public Employment Relations Act or subject to certain aspects of the Freedom of Information Act (depending on state laws).  It also means if there is a change in management company (employer), the entire staff is laid off and it is up to the new charter management company to re-staff the building.

Proponents of  “school choice” seek to privatize education in an effort to turn it into a business with a bottom line.  School vouchers and charter schools run by for-profit companies are seen as part of the school privatization movement. These schools are nothing more than an investment opportunity for businessmen and a way to garner campaign contributions by politicians.  These schools have no oversight and are closed almost as quickly as they are opened with no regard to the well-being of the children. The following is a list of issues associated with the privatization/charter school movement.  For a more detailed explanation, please read Network for Public Education’s  NPE-toolkit-intro-and-13-questions.

How much would your district lose?

SHOW ME HOW MUCH

How is it all connected?

Reforming public education has become a very profitable industry and has more to do with making a profit than it does about educating children.

“Well, I think it’s a very stable business, very recession-resistant. It’s a very high-demand product. There are 400,000 kids on waiting lists for charter schools … the industry’s growing about 12-14% a year. So it’s a high-growth, very stable, recession-resistant business. It’s a public payer, the state is the payer on this, uh, category, and uh, if you do business with states with solid treasuries. then it’s a very solid business.”
David Brain
CEO, Entertainment Properties Trust

WHO DO YOU THINK FUNDS THEIR CAMPAIGNS?

Why should you care?

The long-term goal is to privatize education, give complete autonomy to management companies rather than local school boards, and make schools accountable solely for their performance outcome measured, more often than not, by results on standardized tests.  It is these same tests that are used to “prove” schools are failing; to scapegoat teachers and kids rather than address the real issues that plague our public schools: inequity and lack of funding.

“That’s the standard technique of privatization…defund, make sure things don’t work, people get angry, you hand it over to private capital.”
-Noam Chomsky

Create the fear that public schools are failing
(they are not) 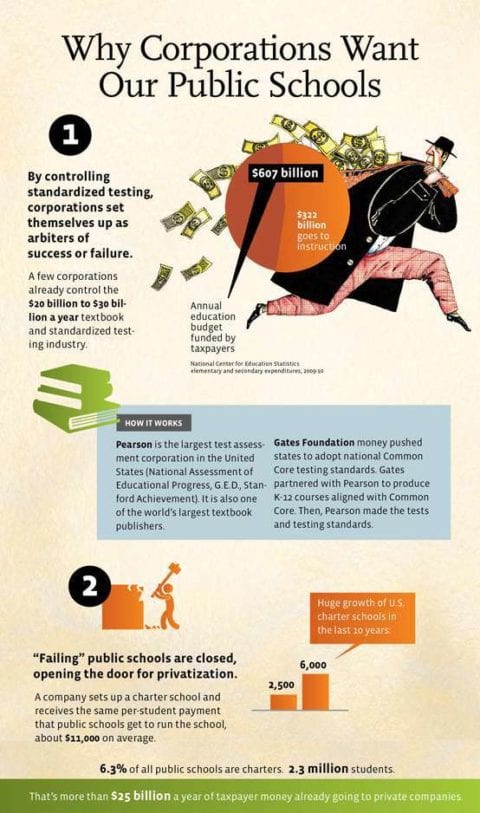 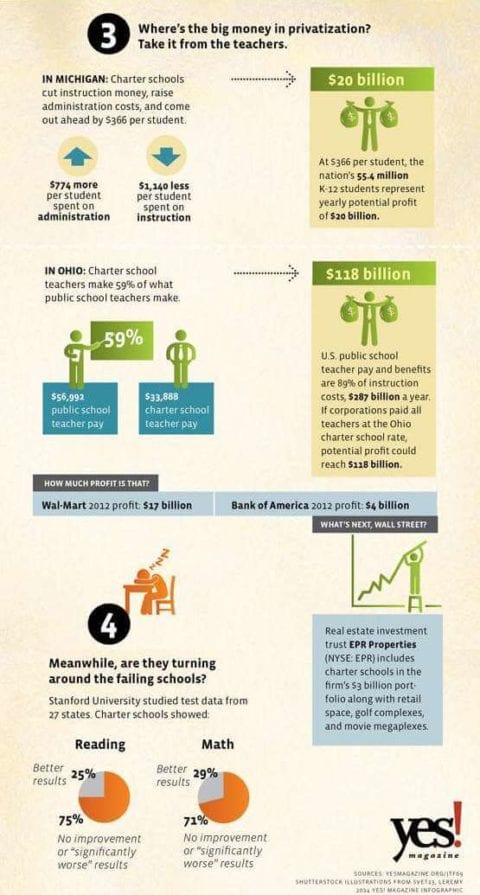 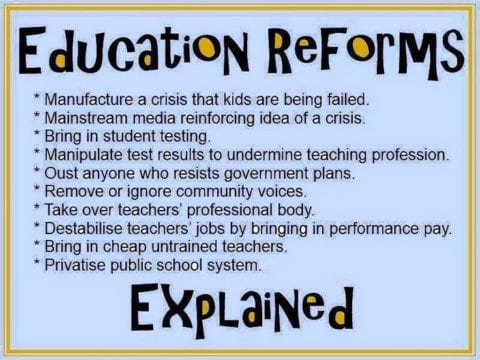 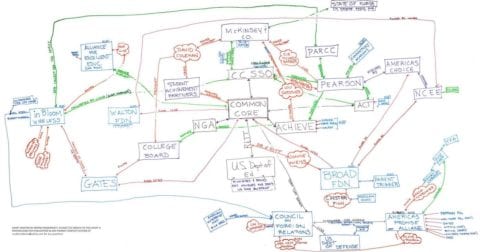 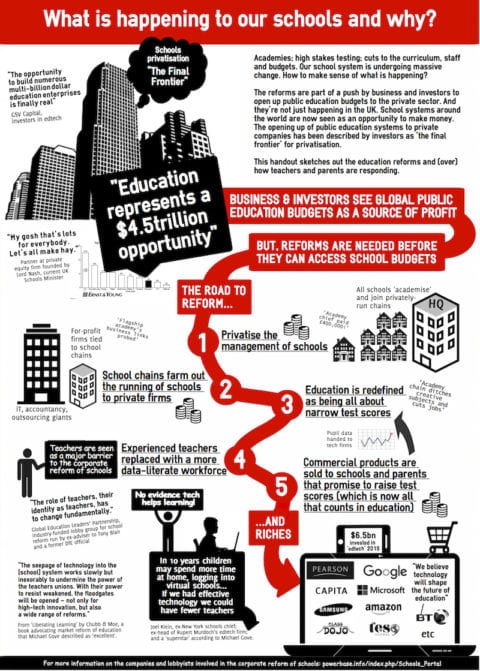 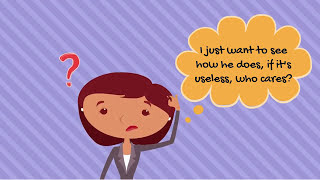 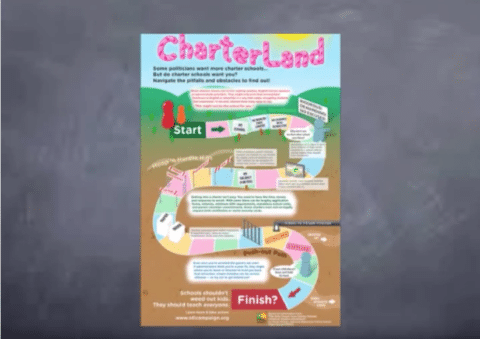